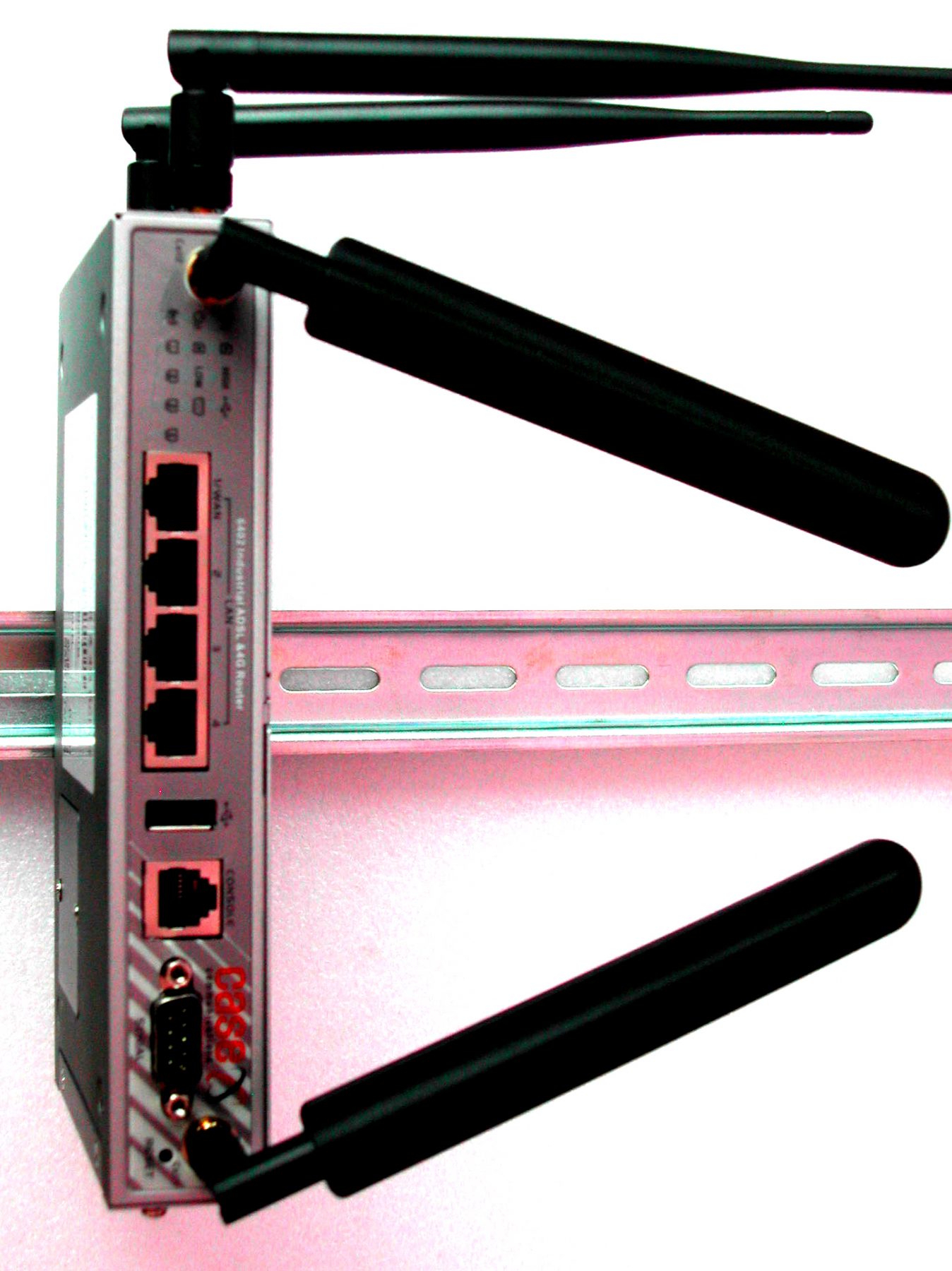 The Case Communications 6402 Industrial ADSL  / LTE 4G Router with MODBUS support is a DIN Rail mounted Router with an RS232 / 485 port,  Wi-Fi and dry relay contacts. Because the 6402 is equipped with  dual 3G / 4G  LTE SIMS it has the ability to provide instant or fall back or top-up bandwidth using a cellular network.

The 6402 has the abilty to load balance between ADSL, its Ethernet WAN and the cellular network. There are three options for load balancing.

By Utilisation – The network manager can configure each available service by percentage of the packets passing through the 6402.

By Application – The 6402 can route traffic based on source and destination IP address, port numbers and applicationBuilt in Wi-Fi within the 6402 allows wireless clients to connect securely using Wireless Encryption standards.

Intelligent use of available Cellular Networks

A Built in dual SIM cellular module within the  6402 allows it to operate over an LTE / 4G / 3G / 2G network. The dual SIMS allows the 6402 to switch between network operators, or can be set to only use one network or the other. The 6402 router can load balance between the cellular and terrestrial networks or route traffic according by application.

There are two modes for operating the cellular network.

Always on – The 6402 connects to the network and keeps the link alive but no data is sent until it is required to be sent. This mode means we have an instant failover with no delays.

On Demand – The 6402 does not make a connection until it has data to send over the cellular network. This mode take a little longer to connect as the ‘dial out’ connection has  to be established.

When operating over the Internet security is vital.

IP Sec is vital to secure operation and the  6402 has the  option of several encryption algorithms, up to AES 256 encryption. Where we are unable to use a fixed IP Address the 6402 supports  FQDN (Fully Qualified Domain Name Server).

Furthermore when using IP Sec its possible to have two tunnels established, a main and failover tunnel.

Both Port and Tagged based VLANS are supported on the 6402 allowing security between devices on the router.

An RS232 / 485 Serial port provides support for legacy devices to be transported over ADSL or the cellular network  and provides  support for MODBUS devices. Using the 6402 industrial router its possible to allow an RS485/232 MODBUS Device to talk to a TCP/IP MODBUS Device through the 6402.

Most importantly the 6402 industrial router has the ability to operate as a MODBUS Slave allowing a MODBUS Master to retrieve network status messages from the 6402.  A full list of the MODBUS registers can be seen at the foot of this page.

Most Noteworthy is that the 6402 Industrial ADSL LTE 4G Router  has dry relay contacts providing  digital Input / Outputs which allows the control of third party devices such as cabinet doors or relay alarms etc.

For maximum reliability the 6402 is equipped with dual power supplies each supply operating from 9 vdc to 48 vdc.

The internet can ‘hang’ and while not a problem in a domestic environment, in an industrial environment the router is likely to be in an unmanned environment and therefore automatic restoration of the service is vital. The 6402 continually checks the status of the internet connection and if it detects the network has failed, it uses the mobile network to restore service.

A USB port on the front of the 6402 router which can be used by a 3G/4G Dongle or used as a mass storage device or other type of dongle. 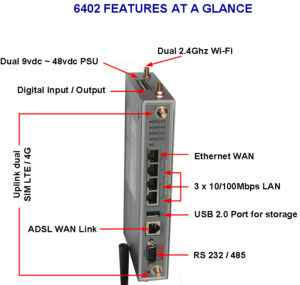 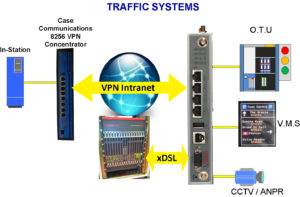 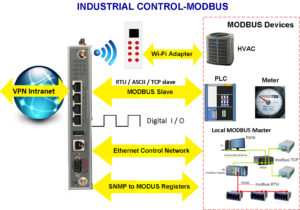 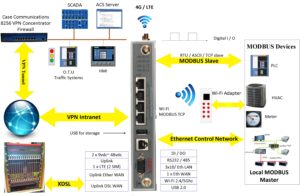