Home›Healthcare Case Studies›West Midlands Ambulance Service
West Midlands Ambulance Service is the second largest ambulance service in England and Wales. With an annual turnover of £30 million, it is a National Health Service Trust serving a population of three million people over an area of 1200 square kilometres. From its headquarters in Dudley, it controls 28 ambulance stations which collectively employ a fleet of 120 paramedic units, 10 motorcycles, 12 rapid-response cars, two helicopter air ambulances and various support vehicles.

“West Midlands Ambulance Service National Health Trust chose Simoco as their supplier of TETRA digital trunked radio because of their track record of service, performance and price. We were delighted to support Simoco’s selection of Case Communications as equipment supplier for the same reasons.” 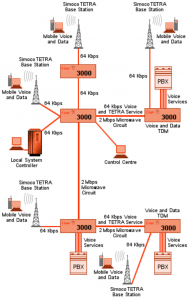 Traditionally, West Midlands Ambulance Service used an analogue mobile communication system, supplied and serviced by Simoco, the UK’s leading supplier of Public Mobile Radios. But, huge demands for increased capacity forced it to look at the integration of a Simoco TETRA (TErrestrial Trunked RAdio) digital network into its command and control system. Because of its tradition of technical innovation, the West Midlands Ambulance Service could identify several key operational benefits of a dedicated private mobile radio network, such as:

West Midlands Ambulance Service selected a TETRA-based solution — supplied by Simoco and utilising Case Communications Series 3000 — to meet the demands of its planned mobile radio network. The Simoco network is one of Europe’s first multi-site TETRA systems, and is compliant with the new open standard for digital-mobile radio, as defined by the European Telecommunications Standards Institute.

TETRA is based on a modulation technique that is totally digital for both the user and the control channel.Case Communications’ Series 3000 2 Mbps voice and data platform was chosen to transport TETRA traffic between the West Midlands Ambulance Service’s regional control centre and 11 remote locations in a distributed ‘spur’ network. This is achieved by integrating voice and data traffic onto an ITU compliant 2 Mbps data stream that is distributed by microwave digital trunks.

The data channels from the TETRA Protocol Interface Control unit are routed to six TETRA base stations in the network. The regional control centre also provides an analogue voice service to six of the remote sites.

The Series 3000 also assures resilience in the network. This is achieved by providing a backup path between two of the remote sites which is designed to bypass link failures. Series 3000 is configured to make use of the link automatically, thus ensuring that West Midlands Ambulance Service communication channels are kept open at all times.

High-quality voice. For West Midland Ambulance Service, high-quality voice is not a luxury! It is essential that the emergency staff get their message through quickly and clearly. This is critical when ambulance crew are talking to consultants in the casualty units — particularly when technical terminology is used.

Voice and data integration will enable West Midlands Ambulance service to eliminate bottle necks in the voice channel, thus avoiding network congestion. The integration of data into the voice channel will also enhance the functionality of automated vehicle tracking systems and digitised mapping.

Automated house keeping. Digitising of the mobile network has the added benefit of improving the speed of traditional manual in-house processes such as: patient report forms, database management and vehicle management.

Network resilience is assured by a backup path between two remote locations which bypasses link failures.

No degradation in signal quality. Unlike traditional analogue mobile radios, where the strength of the signal can fluctuate, with Series 3000’s digital capability there is no degradation in quality.

Improved operations such as patient report forms and database management, which until now have been compiled and updated manually, can now be automated. Vehicles can now be tracked and monitored quickly and easily.